Skip to content
What Suzi Quatro has taught me about business

What Suzi Quatro has taught me about business

Today is International Women’s Day and I’ve been reflecting on what it means to me to be a woman in business. To be honest, I don’t make a big deal of my gender in how I go about my life or work. While I can’t think of first-hand perks or preclusions that I could attribute to my being female, sure, I’ve worked in offices with a boys’ club culture. I’ve read statistics about the glass ceiling, I’ve been gobsmacked by the treatment of women in politics and distressed by the incidence of violence against women.

I was asked recently who my business role model is, but I kept drawing a blank – especially when trying to think of a female business role model. Many entrepreneurs trot out names like Richard Branson, Seth Godin, Steve Jobs, even. I haven’t read their books or bios and really only have a passing knowledge of them. To me, Branson is the guy who started Virgin Records long before he launched the global airline empire! That’s right – it’s more about the music for me. And funnily enough, around the same time Branson started Virgin in the early ‘70s, a young female musician was making her mark. A petite powerhouse singer and bass player from Detroit named Suzi Quatro.

I’ve been in awe of Ms Quatro since I was 8. (So in awe, that I’d wanted to change my last name and learn bass guitar – but that’s yet to happen.)

This year, Suzi Quatro is celebrating 51 years in the music business with her final Australian tour (2019 update: Suzi’s still touring – she’s obviously rethought the ‘final’ thing). I saw her Sydney show in February and was reminded how much she still influences me: her no-nonsense, down-to-earth attitude, her rock chick style. With steely determination, she took on the male-dominated music industry, fronted an all-male band and forged her own place in rock music.

She attributes her longevity in the business to her traditional family background and the fact she takes what she does very seriously. Interviewed on ABC-TV, she said: “I like to consider myself a professional. That’s what I do, this is my job. I take it serious.”

While she’s known for her tough rock chick image, she still wears her softness openly. I found her energy and on-stage banter quite motherly, despite her saying numerous times, “I don’t do gentle” (also the title of one of her songs).

In the ABC-TV interview, she explained: “If you’re a true artist, you are ridiculously vulnerable and soft. That’s the other side of the toughness. I hurt very easy. Some people think it’s a weakness being so emotional. I like to think it’s a strength.

[The tough rock chick] is part of me too. That’s the public side. You need to be hard nosed and no matter what hurt people put you through, you need your focus and [direction].”

While Quatro has inspired countless female musicians, she says there were no female role models for her when she started and she asked herself: “Why should I be like anybody else? Why can’t I just be like I am?

“There was a chance that whatever I was doing – and still doing now – might not have been successful. I took that gamble.”

Suzi Q has kept her integrity, never resorted to the “sex, drugs and rock ’n’ roll” cliché – and at 64, she still rocks a mean leather jumpsuit! 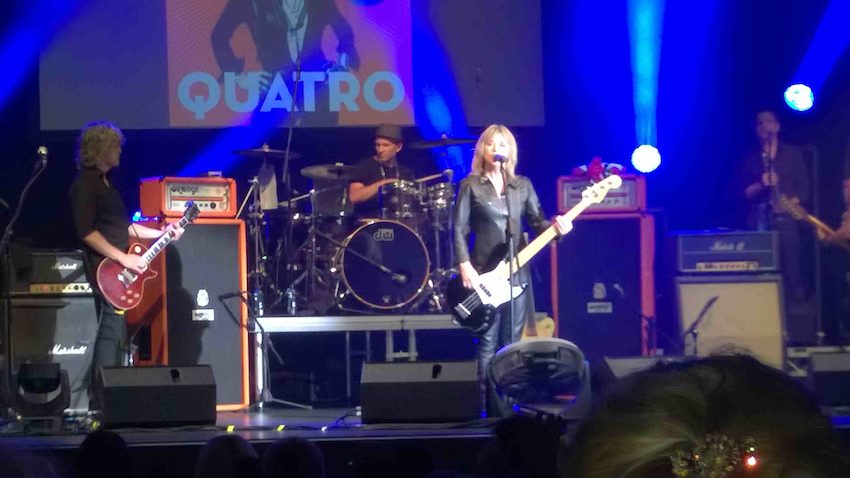 So here are 5 things Suzi Quatro’s taught me about business:

Who are your female business role models? Do  you have any unlikely influences?